(28 May - 4 Jun) South Park 9.1-9.7 (2005, Trey Parker) 85
[ Yet another example of the genius of Mr. Trey Parker: the way he seems to be able to use and abuse clichés at will. To make a disaster movie parody with hippies instead of a new ice age or whatever is easy enough, but what makes that episode so clever and funny is how it subverts all the little details of the genre, with Cartman as the guy who predicts the catastrophe ahead but who isn't taking seriously... Until It's Too Late! Same thing with the sports movie spoof, which takes the clichés into the stands with the trash-talking drunken dads fighting it out while the Little League teams are actually trying to lose! Then you got episodes that gloriously keep pushing the line of good taste, like the one where they redo the Terry Schiavo case with a PSP, an army of demons and a "Keanu Reeves". In other news, Mr. Garrison becoming a woman? "I'd rather be a woman who can't have a period than a fag. Who wants to pound my vag'? GIRL POWER!" Too funny. ] 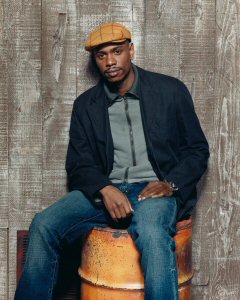 (6, 9 Jun) Chappelle's Show Season One (2003) 75
[ Aww, snap! I love me some Dave Chappelle. I can't even remember the number of times I've watched "Half-Baked" and I also loved him in the hilarious "Screwed" and in some of the other movies he's appeared in. Still, you ain't seen nothing until you've seen his comedy in all its undiluted wildness like on Chappelle's Show. The sex stuff ("I'm just a nigger that loves titties."), the race stuff ("Crack, here I come."), the foul language("Haters wanna hate, lovers wanna love / I don't even want none of the above / I want to piss on you"): it's all good! ]

(16 Jun) la vie comme elle va (2005, Jean-Henri Meunier)
[ In 1995, filmmaker Jean-Henri Meunier left Paris to go live in the French countryside, more precisely in the small town of Najac. Then one day, for no particular reason, he started to carry a camera along with him when he rode his scooter around and captured some of the faces that populate this uneventful but pleasant village. There's Hubert, the saxophone-playing mayor, Henri, a widower who only ever stops doing harsh physical work to play with his collection of dolls (!), Céline, a grumpy 105 year old, and many more. Not to mention the various dogs, chicken, cows and sheep that coexist with the citizens of Najac. This is a simple, maybe a little self-indulgent film, but all Meunier wants is to share his love for his neighbours and at that he certainly succeeds. ]

(20 Jun) dogora (2005, Patrice Leconte)
[ In his voice-over intro, French filmmaker Patrice Leconte tells us about how he always wanted to make a movie with no actors and no dialogue, a purely musical, impressionist experience. In other words, a knockoff of "Koyaanisqatsi" and "Powwaqatsi", Godfrey Reggio's influential experimental documentaries. Leconte's picture is mostly a depressing travelogue of Cambodia, showing us endless images of poor kids in the streets, in sweatshops, in dumps, etc. It's a sad reality worth being reminded of, but the repetitive nature of the film undermines its impact. And, try as he might, composer Etienne Perruchon is no Philip Glass. ]

(23 Jun) Les temps qui changent (2005, André Téchiné) 34
[ Good old Gérard Depardieu stars as a French construction contractor who asks to be transferred to Tanger so he can stalk and maybe win back his long lost flame, a radio host played by Catherine Deneuve. Various subplots involve her doctor husband, their bisexual son, his depressed girlfriend and her estranged twin sister, but most of the story revolves around "whether a first love can become a last love". The performances are decent and I like that the film assumes its naïve corniness, but the softcore 70s porno music and cinematography are a bit too much for me. ]

(26 Jun) Brice de Nice (2005, James Huth) 38
[ Following the playbook from all those Saturday Night Live spin-offs, Jean Dujardin stretches a cult TV skit into a big screen feature, to mixed success. He's pretty funny as Brice, a wonderfully clueless poser who models himself on Bodhi, the surfer character Patrick Swayze plays in "Point Break". Unfortunately, Dujardin and his co-writers didn't come up with much more for Brice to do then to repeat his catchphrases ("Ça farte?", "J't'ai cassé!") over and over. There are a few amusing bits, like Clovis Cornillac as a doofus with a terrible secret in his shoes, but the film remains uneven at best. ] (29 Jun) Eldorado (1995, Charles Binamé) zzz
[ I only watched twenty minutes of it (it was playing on Télé-Québec) so I can't say for sure, but what I saw damn well felt like the worst movie ever made. The WORST! Retarded, pretentious, pointless... Oooh, we're so Gen-X, ooh, sooo existential and tormented... Pascale Bussières rollerblading, James Hyndman talking about his dick, Pascale Montpetit being her usual obnoxious self. I've never been this embarrassed to be a Montrealer. ]